In 1903, the houses of the Sacred Heart in France, being threatened by expulsion, the General Superior thought of opening a house in Egypt. Despite that the country has still been under the British occupation, yet the families, whether Syrian-Lebanese or Copts, wished that their daughters would learn the French language. As the circumstances in Alexandria were not encouraging, the sisters who were looking for an appropriate location, went to Cairo where they were welcomed with all love by the sisters of Notre Dame des Apôtres, awaiting to be lodged temporarily in a villa at the beginning of 1904. In conformity with the Constitutions of the Society, the house intended to receive students was previously a strict boarding school. It was completed in 1906. They quickly opened a half-paid day school on the piece of land, and it received a bigger number of students than the boarding school.

The first community had 7 sisters belonging to four nationalities: three French, two Irish, one German and one Austrian. 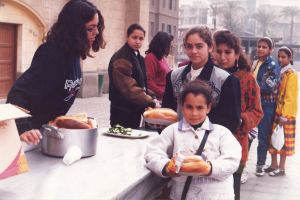 The variety of nationalities of the community founders not only remained as such, yet increased all through our history. Among the 365 sisters who came from abroad, there were 25 nationalities, among which 174 French, 80 Spanish, 22 Italians, 13 British, 12 Irish, 10 Belgians…. Actually remain one French, four Spanish and one Dutch over 29 sisters.

The second house was that of Ramleh in Alexandria, in 1908. Not being able to receive students, the sisters were busy working in diverse charitable works. But in 1922, the community left and the house remained for the sisters who came to spend their summer vacations. It has been reopened in 1952 to start a school, and then closed again definitively in 1962. 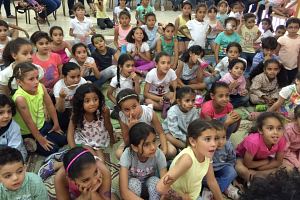 In 1911, a boarding school similar to that of Cairo opened in Heliopolis. From this point onwards, whatever we mention applies to both houses. The organization and the study plan were similar to those of the houses in France, upto 1956. After Nasser revolution, we have followed the official program with a difference of one compulsory option for studying the French language at a higher level than that of the first language in the State schools.

Very rapidly, after the war of 14-18, we started accepting half-boarders, but in 1956 we stopped receiving boarders because of the political and religious circumstances. In 1974, the half-board has been suppressed. The “boarding school of the Sacred Heart”, so dear to our alumni, are now day school called “College” which educate about 2000 students, from Kindergarten to the Egyptian Baccalaureate. A section for obtaining the French Baccalaureate has also been opened in Cairo since 2005.

During the two world wars, despite the presence of the allied armies and the west desert battle, the life in our houses has not really been affected. It is rather since 1948 that the political disturbances and the wars with Israel which gave us difficult times: compulsory vacations, receiving refugees, financial problems, multiple inspections, compulsory and sometimes incoherent school laws, terrorist threatening.

But in spite of the fear from expulsion or nationalization which was sometimes witnessed, we were able to continue in the first place our work of ecumenism, tolerance and inter-religious dialog. We always put the formation of our students for acquiring a profound and personal faith, as our objective. We also want them to have a social feeling that makes them care for the most unloved of their compatriots.

Egypt province has taken this objective very seriously as of 1966. It was a true turning point in the life of the province. Favoring the suppression of the closure towards the sisters, they were able to go with the students towards the poorest people in the country. First in the popular districts in Cairo, then in villages of Upper Egypt where the first establishment took place in 1966 in the small city of Samalout. It was soon followed by that of Beni Ebeid in 1971, then Abou Korkas in 1972, Dairout in 1974, Ghanayem in 1977, and Bayadeya in 1980. Actually remain the first three and the last one, the others had to be closed due to a human mistake… At Abou Korkas we have “Sacred Heart School” which includes from Kindergarten to Preparatory Level. In the other houses, we follow our educational mission, through kindergartens and classes for the mentally retarded, whether in collaboration with the secular association of schools of Upper Egypt, or in feminine centers for promotion and literacy, and in social or parish-related activities. Samalout dispensary is also a place for training mothers in childcare; it is mainly specialized in treating burns.

Meanwhile, the province tried to establish a house in Beyrout in 1971. But…the civil war in Lebanon in 1975 forced us to close the students’ home which we have started.

Another establishment in Ismailia started in 1995: it was previously a home for noviceship, and presently a home for the students of the Canal Zone.

This is how the small province of Egypt is continuing its educational work required by its founder with the glory of the heart of Jesus.