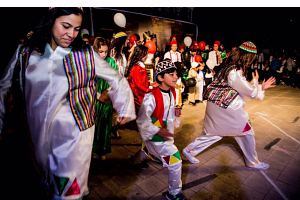 When Sedky Pacha came from Alexandria and settled in Heliopolis, he requested that there would be a boarding school of the Sacred Heart similar to that found in Cairo, but where Muslim girls would also be admitted, as until then, they were students of Zion. The request was relayed to our Reverend Mother who accepted this suggestion; and on September 29, 1911, four mother sisters and three sisters settled in three temporarily rented villas located in front of the future building.

Heliopolis, city of the sun, where sand appeared miraculously, clear light, less noisy than Cairo though not more than 10 kms away, attracts families who are looking for quietness and pure air.

The establishment is due to the initiative and admiring energy of a Belgian guy, Baron Edouard Empain, who drew the plans and guided the basic constructions in an Arabic style which gives it a very particular style. Forty years ago, this charming oasis of greenery was only a desert, and its actual population was 200,000. The Latin Basilica, dedicated to Notre-Dame represents the center of the new city, where you find roads in all directions, along which there are villas. Our building with its long corridors, whose architectural style has been imposed on us, is surrounded by a garden, and this is considered a victory over the desert.

The major importance of Heliopolis to Christians is represented in the memories of the Holy Family in Egypt. Old Heliopolis, where, according to the best traditions, the exiled divines lived, is located at a short distance from the new one, at Matarieh, where we can still see the tree of Virgin Mary and a marble obelisk which is a valuable remains of a Pharaonic temple.

There are 400 children who actually go to Heliopolis school; diverse religions, nationalities, and rituals join this school, and this does not have a negative impact on the unity. The style of education is the same as that of the school in Cairo.

Our children would not belong to the family of the Sacred Heart if they would not love the poor. This love is witnessed at the school by helping poor families; and after graduation, by the work done for the trousseau of the young girl, and that of the Layette, under the supervision of our alumni. The Apostolate, dear to the children and to the graduates of both schools, is the one with the schools and the dispensaries of Upper Egypt, which develops their social sense with the help offered to the children and the families of farmers to take them out of the misery of being “unworthy of human beings”.

Among our graduates, there are groups of “responsible persons” who do several rounds of 2-3 weeks each, with respect to the issue of hygiene in villages. They spend there the whole day in treating eyes, ears,…and heads of children, teaching them how to be clean, do physical exercises, play, sing and pray. They also do a good job in sewing dresses and galabeyas (tunics for boys) for the 120 schools, for free, and supported only by donations collected in all districts of the city. At the boarding school, the children annually organize an exhibition during the Holy Week where all classes participate in a competition of their skills and generosity in their talents and works for the young farmers. We see as well remarkable piles of barley sugar and chocolates, fruits of their offerings, Arabic or French alphabets, maps of Africa and Egypt, some decorations, frieze (wall ornament), boards, photos, copybooks, pencils, combs, a small pouch for keeping crafts, etc… The reward of the Lent practice is to give the children of a poor school located at a suburb in Cairo a part of this stuff; it’s a great joy to our children.

At this time of social evolution, a number of possibilities avail; the students of the Sacred Heart should seize this opportunity to get involved in the general activities, and participate in the welfare of their country with respect to renovations and unity for what is best. Some graduates have already been committed, they attend social welfare courses and infirmaries; hence they will be able to enter into all fields and participate in the development of the social standard. Those who chose journalism as their career will target the same aim, since they understood that this aim can be a means of apostolate through its influence upon the world today. Others have enrolled in the work of La Bonne Presse (the Good Press) which offers the youth a healthy and interesting reading, and helps to launch a magazine for the young girls. Their aspiration is to be loyal to the requests of the Children of the Sacred Heart, which means being “the yeast of the dough”.

The work done in this mission is unseen. Our apostolate will remain indirect for a long time; it will increase the worries of the Egyptian young girl, lead to a better understanding between Christians and non-Christians, and maybe, this rise will end up one day to the achievement of this unity which is one of the major concerns of the Pope, and for others, for the access of Light.

(The writing, R. M. du Ligondes adds that this relation – without signature – has also been sent in 1958, in Colombia, and in 1960, in Chili, with some modifications)