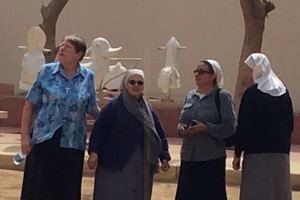 This house has been requested by Mgr Nosseir, and encouraged by a graduate from Heliopolis who wanted to give us (or sell?) the house of her father, but he refused. At the beginning, we found a ground floor which was a quarter of an hour far from the school; and we sent Sisters Hernandez and Dolores to clean the place three days before going there. The five founders together with Mothers Ustara and Joy came from Ghamra on September 8, 1966. It took them 7 ½ hours by bus, because of the dam at Beni Soueif.

The first mass: tabernacle brought from Spain by Sr Arbeloa

On the 9th, a visit to Abouan with Father Antoun Naguib for a vacation in Samalout. Choc!

Then, departure of the Mothers and two Sisters.

Within ten days, the move, the flat was full of sewers and rats…Sr Fawzeya has been bitten.

New premises, well situated, just behind the school: move of furniture in three journeys by cart.

Within a month, they started a course of sewing for the ladies of the Parish. Once a month, departure at 9 o’clock to Abouan in a Fiat taxi, model 1929, to attend courses of sewing and catechism until 12 ½; but sometimes back after waiting for three hours on the road… in a tractor, or a cart.

We quickly reached the conclusion that it was necessary to have a car, which we actually obtained from the Mother House. Adela was given the first driving license given to a woman in Minya.

All afternoons, Father Kyrillos, our curate and school’s director, led a Copt liturgy.

All months, a visit by Mothers Ustara and Joy. Father Ayrout used to come and visit us as well.

In January 1967, Sr Schiaffino left for Spain where she has undergone an operation of the sciatic nerve. Sr Nieto replaces her in the community, however, it is Adela who replaces her in conducting the catechism, by memorizing the course which was prepared and translated by Father K.

In October, the start of the apostolate in Bardanoha.

In January 1968, Sr Schiaffino leaves again (due to a stomach ulcer) and is replaced by Ghislaine Jauffret.

We had a visit from the General Assistants: Mothers Drujon (December 1967) and Wakamatsu (May 1969).

From the beginning of the establishment, we were seeking to buy a piece of land; and we found one which was very close to the school, but Father Ayrout brought up some difficulties… Thanks to the medals of St. Benoit and St. Madeleine-Sophie, which were placed as a blessing when constructing the house, the price of 7LE per square meter has been reduced to 3 ½ LE. This was a favor from the Copt Orthodox landlord for the sisters. It will be paid by a part of the revenue of our house in Ramleh.

The first stone has been placed on March 15, 1969, and the Propagation of Faith helped in the building of the house with a donation of 16000LE.

Mgr Stephanos I and Mgr Ghattas comes to give her their blessing, Sr Adela starts a workshop which was sewing the school uniforms.

As of 1970, we start a trial of an apostolic school with Afaf Georges who is preparing her three years of preparatory classes, after which she goes back to her family for sitting for the Diploma of Commerce, prior to her admission request. Other three candidates, only one succeeded, Camelia Nassif.